5 Reasons You May Want to Get Familiar with Rhubarb 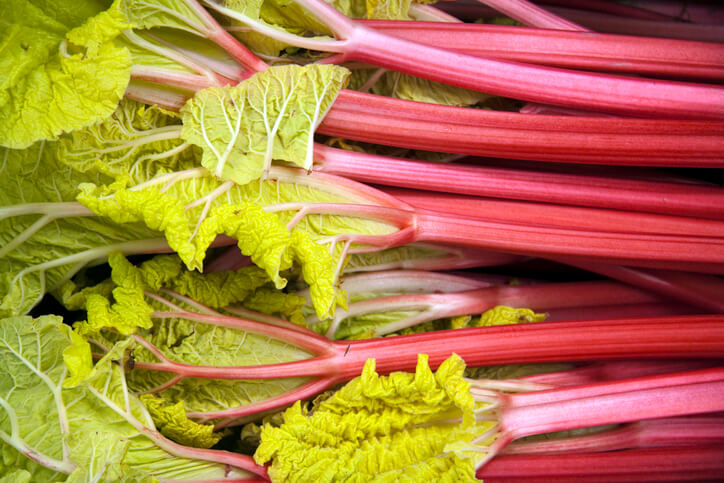 In random news, this Saturday in Duluth, MN people will be celebrating everything rhubarb. I don’t know much about rhubarb other than the fact that the stalks resemble red celery, and people sometimes eat rhubarb pie. So naturally I became very curious about it.

Rhubarb is a vegetable, and rhubarb season tends to run from April through June. If you want to “prolong the season,” consider storing some rhubarb stalks in your freezer. Raw rhubarb is tart and bitter. But when it is cooked, it takes on a sweet flavor which is often why rhubarb is used as an ingredient in pies and other desserts as well as preserves. (Rhubarb is often paired with strawberries).

The weird thing about rhubarb is that legally it is considered a fruit.

“In 1947 a New York court declared rhubarb a fruit because it's most often cooked as one in the United States (and, it's said, because it was a way to save businesses who imported these stalks from spending additional money on taxes),” according to one source.

But rhubarb is, in fact, a veggie, and there are other ways to eat it other than in pies and desserts. For example, check out this recipe for roasted asparagus with rhubarb vinegar. You can also lightly roast some chopped rhubarb and mix it in a leafy green salad.

Before you start heading to the store or farmers’ market to stock up on rhubarb, note that the leaves of the rhubarb plant should never be consumed. They are actually poisonous!

“The chemical villain in rhubarb leaves is oxalic acid, a compound also found in Swiss chard, spinach, beets, peanuts, chocolate, and tea. Chard and spinach, in fact, contain even more oxalic acid than rhubarb—respectively, 700 and 600 mg/100 g, as opposed to rhubarb’s restrained 500,” according to National Geographic.

“Oxalic acid does its dirty work by binding to calcium ions and yanking them out of circulation. In the worst-case scenario, it removes enough essential calcium from the blood to be lethal; in lesser amounts, it forms insoluble calcium oxalate, which can end up in the kidneys as kidney stones. In general, however, rhubarb leaves don’t pose much of a threat. Since a lethal dose of oxalic acid is somewhere between 15 and 30 grams, you’d have to eat several pounds of rhubarb leaves at a sitting to reach a toxic oxalic acid level, which is a lot more rhubarb leaves than most people care to consume.”

I think it’s also safe to say you can still enjoy the other foods previously mentioned that also contain oxalic acid, but, nonetheless, do not eat rhubarb leaves. (Foods such as spinach and chard are very nutrient-dense and may be great foods to include in your daily diet).

Now let’s get into some of the potential health benefits of rhubarb.

“For thousands of years, Rhubarb had been used for various diseases including severe infection,” reports the National Institutes of Health (NIH).

And the NIH discusses one study which “...showed that Rhubarb might be effective in reducing injuries induced by sepsis in gastrointestinal tract, lung, and liver, and its potential mechanisms for antisepsis might include reducing oxidative stress and inflammation, ameliorating microcirculatory disturbance of adhesion molecule expression, leukocyte adhesion and cytokine release, and maintaining immune balance during sepsis.”

Rhubarb is very rich in vitamin K. This vitamin may have a positive impact on bone mineral density and decrease the risk of fracture.

However, also keep in mind that, “Vitamin K is most commonly used for blood clotting problems. For example, vitamin K is used to reverse the effects of ‘blood thinning’ medications when too much is given,” reports the NIH.

So if you are currently taking blood thinner medications (like warfarin (Coumadin)), it is extremely important that you consult your doctor before eating rhubarb and other foods that are very rich in vitamin K. Also ask about newer anticoagulants such as dabigatran (Pradaxa), rivaroxaban (Xarelto) and apixaban (Eliquis). These newer medications are not affected by vitamin K.

As a general rule of thumb, always seek the advice of a competent healthcare professional regarding what foods you include in your diet if you are taking any medications or supplements and have any existing health issues.

“Researchers have found that baking British garden rhubarb for 20 minutes dramatically increases its levels of anti-cancerous chemicals,” according to this research report on a study.

“These chemicals, called polyphenols, have been shown to selectively kill or prevent the growth of cancer cells, and could be used to develop new, less toxic, treatments for the disease, even in cases where cancers have proven resistant to other treatments.”

The fiber present in rhubarb may have cholesterol-lowering effects. This study discussed by the NIH found evidence which suggests that hypercholesterolemic (having high cholesterol) men who consumed rhubarb were able to lower their bad cholesterol without changing the level of the good cholesterol. The men in the study consumed 27 grams of ground rhubarb stalk fiber per day for four weeks.

One study found evidence showing that “...a rhubarb glucoside compound, rhaponticin, can protect the body against Alzheimer’s. In vitro results show the rhaponticin is positively linked to preventing the harmful effects of amyloid beta, which are peptides of 36-43 amino acids that are crucially involved in the formation of amyloid plaques found in the brains of patients suffering from Alzheimer’s disease,” according to this report discussing the study.

Again, do not eat the leaves of the rhubarb plant.

“While it’s one of the richest vegetable sources of calcium, with one cup containing more calcium than one cup of milk, not all of it is absorbed by the body. Only about a quarter of the calcium is absorbed, so calcium isn’t its biggest benefit,” according to this source.

If you are pregnant or breastfeeding or have any existing health issues, be sure to consult a competent healthcare professional about including rhubarb in your diet.