Be Proactive About MRIs 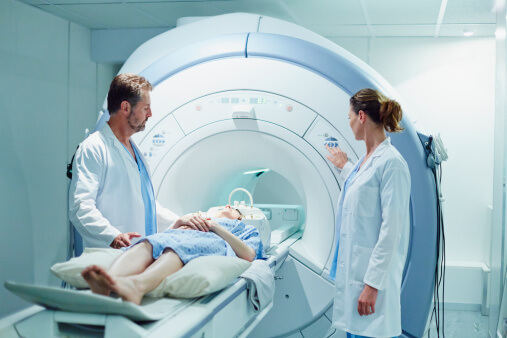 If you’ve never had an MRI scan, you’ve likely seen what these machines look like by watching some of your favorite medical drama TV shows, like “Grey’s Anatomy,” “Scrubs” and “General Hospital.”

These machines look like something you would see inside a space shuttle, and they are especially not fun for those of you who are claustrophobic.

But the MRI, created by Dr. Raymond Damadian in the 1970s, is today widely considered one of the best medical diagnostic imaging methods.

An MRI, short for magnetic resonance imaging, uses a large magnet and radio waves to look at organs and structures inside your body. Essentially, an MRI makes detailed pictures of your insides. It is not the same as an x-ray or CT (CAT) scan, which both use radiation.

“The brain, spinal cord and nerves, as well as muscles, ligaments, and tendons are seen much more clearly with MRI than with regular x-rays and CT; for this reason MRI is often used to image knee and shoulder injuries,” according to the National Institutes of Health (NIH).

“In the brain, MRI can differentiate between white matter and grey matter and can also be used to diagnose aneurysms and tumors.”

To break it down a bit more: if you get an MRI of your heart and blood vessels, this will help detect issues such as blocked blood vessels, damage caused by a heart attack and heart disease. You can also detect brain injury, multiple sclerosis, spinal cord injuries and stroke with an MRI. And if you get an MRI of your bones, this will help your doctor determine whether you have bone infections, damage to your joints or bone cancer.

People even get MRIs done of the breast, kidney, liver, prostate and more.

And here’s probably one of the best parts: it’s non-invasive.

So as you can probably imagine, MRIs have saved countless lives and have detected a multitude of diseases.

But in a very strange and devastating story, a man recently lost his life due to an MRI injury.

In Mumbai, India, a man named Rajesh Maru was yanked toward an MRI machine during a hospital visit to see his relative. Reportedly, Maru had been handed a metal oxygen cylinder to carry. He then entered the MRI room after being told that the machine had been turned off, “but the powerful magnet that runs the machine was functioning and pulled the oxygen cylinder toward it,” according to this report.

Mumbai police said he may have died from inhaling liquid oxygen from the damaged cylinder. Two hospital staff members have been arrested due to their negligence.

“MRI imaging is quite safe for human tissue, but introducing metal near the machines can be deadly,” the report says.

“That's because the MRI machine works by using large magnets to create strong magnetic fields, 1,000 times the strength of a standard refrigerator magnet.”

MRI machines are so powerful and have such a strong magnetic force that if there is ANY metal in the room while the machine is turned on, it will yank metal objects toward it.

This is not the first time someone has died from an MRI accident.

In 2001, a 6-year-old boy was killed after enduring a skull injury from an MRI machine. There was a metal oxygen tank present in the room while he was having his exam, and it flew through the air because of the strong magnetic force and fractured the little boy’s skull.

In 2015, a 17-year-old girl was burned from an MRI scan because the technicians allegedly failed to remove the metal EKG leads from her chest and abdomen.

(An EKG (electrocardiogram) records the electrical activity of your heart).

Fatal MRI accidents are relatively rare, but a single life lost to a life-saving machine is one too many. If you have to have an MRI, it never hurts to speak up and tell your doctor and the technicians your concerns. Double check that ALL metal objects have been removed from the MRI room.

Anyone who has certain metal implants that cannot be removed, like older pacemakers, may not undergo MRI scans.

You also need to communicate with your doctor if you have:

People with tattoos also need to keep in mind that some tattoo ink may contain traces of metal. There have been some incidences of people with tattoos being burned during MRI scans. If you are having an MRI and feel any discomfort whatsoever, tell the doctor and technician immediately.

MRIs are generally safe for pregnant and breastfeeding women, but, as always, ask questions and consult your primary care doctor.

And remember, NOTHING with metal is allowed in that MRI room: cell phones (I know a selfie would be cool during your MRI, but no!), keys, underwire bras, coins. Absolutely nothing! It could save you from being burned very badly or even save your life.