For the Love of Meat, Let’s Talk About the Impossible Burger 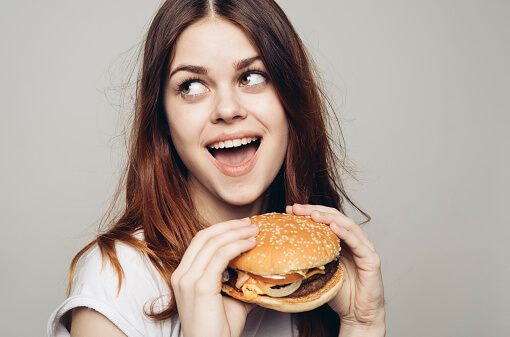 Meat is a major staple in the American diet. But many Americans are eating less meat or  following a plant-based diet. Recent data suggests that six percent of Americans now identify as vegan.

People generally choose a vegan diet for a variety of reasons including their love of animals, concern for the environment, health-related reasons or all of the above.

And if you are familiar with a vegan diet, you may have heard of “meat substitutes” such as Tofurky. You may also know about veggie burgers, like the Boca Burger.

But have you heard of the “Impossible Burger?”

What is the Impossible Burger?

Heme is an iron-rich molecule abundantly found in real meat. In the case of the Impossible Burger the heme comes from soy leghemoglobin, a protein extracted from the roots of soybean plants.

“We discovered that heme is what makes meat smell, sizzle, bleed, and taste gloriously meaty. Consider it the ‘magic ingredient’ that makes our burger a carnivore’s dream,” says Impossible Foods.

This burger is so popular that reportedly it has brought in more than $250 million from investors, including Bill Gates. Its' claim to fame is that it is good for you, better for the environment and still ‘bleeds’ and somewhat tastes like the good old classic American hamburger.

For those of you who enjoy the taste of meat this might sound too good to be true, right?

Some seem to think it is. There are reviews calling the Impossible Burger dry, lumpy and by no means comparable to a traditional meat burger. There is also some controversy regarding whether this burger is a safe and healthy food for us to eat.

The U.S. Food and Drug Administration (FDA) may not be convinced all the ingredients, particularly soy leghemoglobin (which makes the burger “bloody” and gives it a meat-like texture), are good for human consumption.

(Food manufacturers do not have to seek FDA approval for new ingredients).

In a 2015 memo, the FDA stated that “although proteins are a part of the human food supply, not all proteins are safe. Information addressing the safe use of modified soy protein does not adequately address safe use of soybean leghemoglobin protein from the roots of the soybean plant in food.”

The FDA also said that soybean root is not a commonly consumed human food, and that Impossible Foods has not done enough testing to determine whether this ingredient will cause an allergic reaction in some people.

Impossible Foods responded with the following: “Though the protein is isolated from the root nodule, it is substantially similar to proteins consumed daily by the global population, in the form of meat and other vegetables. Impossible Foods did not rely on the use of modified soy protein as the sole basis of its determination regarding the safety of the soy leghemoglobin protein.”

However, a more recent, 2017 report from the National Institutes of Health (NIH) concluded that credible sources about soy leghemoglobin found no evidence of allergenicity or toxicity for this protein. Since the NIH is a highly reputable source, it appears that this ingredient may very well be perfectly safe for human consumption.

But for quite some time, the issue of whether soy in general is good for you has been widely discussed.

And there are many contradicting reports about whether consumption of soy may be connected to increased cancer risk, particularly hormone-dependent cancers (like breast).

We cannot definitively say that soy is good or bad for you, but the American Cancer Society says that “[s]oy contains compounds called isoflavones. Isoflavones can act like estrogen in the body and may help protect against hormone-dependent cancers. There is growing evidence that eating traditional soy foods such as tofu may lower the risk of cancers of the breast, prostate, or endometrium (lining of the uterus), and there is some evidence it may lower the risk of certain other cancers. This might be because the isoflavones can actually block the more potent natural estrogens in the blood.”

In regards to the Impossible Burger, we also have to acknowledge that soy leghemoglobin is a GMO (genetically modified organism).

GMOs are also a major topic of discussion in the food and health industry.

The World Health Organization (WHO) defines GMOs as “organisms (i.e. plants, animals or microorganisms) in which the genetic material (DNA) has been altered in a way that does not occur naturally by mating and/or natural recombination. The technology is often called ‘modern biotechnology’ or ‘gene technology’, sometimes also ‘recombinant DNA technology’ or ‘genetic engineering.’ It allows selected individual genes to be transferred from one organism into another, also between nonrelated species.”

“By far the biggest use of GMO technology has been in large-scale agricultural crops: At least 90 percent of the soy, cotton, canola, corn and sugar beets sold in the United States have been genetically engineered,” according to one report.

One of the main purposes of GMOs is to make crops more resistant to plant diseases (from insects and viruses) and provide protection from herbicides. Just last year, genetically modified apples that “would not go brown” went on sale in the U.S. The product was approved by the United States Department of Agriculture (USDA) in 2015.

So similar to the discussion of whether soy is good or bad for you, there are also mixed reviews on whether GMOs are safe or harmful to humans.

Concerns surrounding the consumption of GMOs include toxicity of the food, allergic reactions, antibiotic resistance, immunosuppression, cancer and loss of nutrition when modifying natural foods.

“There are several current efforts to require labeling of foods containing products derived from genetically modified crop plants, commonly known as GM crops or GMOs. These efforts are not driven by evidence that GM foods are actually dangerous. Indeed, the science is quite clear: crop improvement by the modern molecular techniques of biotechnology is safe.”

So the question remains...is the Impossible Burger safe to eat?

The credible evidence suggests it is safe to eat. However, it really comes down to personal choice and being knowledgeable about what you are putting in your body. And when it comes to nutrition, moderation is key so it might be wise not to eat an Impossible Burger every day.

You can see a full ingredient list of the Impossible Burger here.

Furthermore, it is important to note that most soy allergies are seen in children under the age of 10. So you should monitor your children’s intake of this burger. Many children can develop a tolerance to soy once they are older, but have your child take an allergy test just to be sure.

And if you have any dietary restrictions or existing medical issues, you should speak with a competent healthcare professional before you give this burger a go.