It May Be Good to Be a Bit Salty 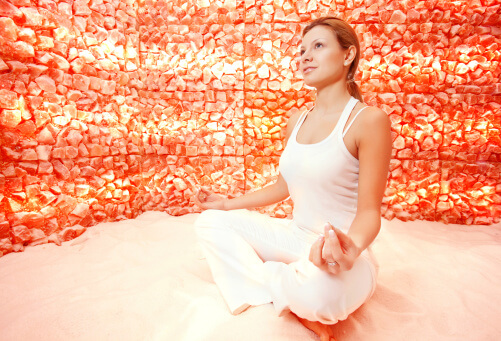 You are probably familiar with how uncomfortable it is to get salt in your eye or in an open cut on your body. So if I were to suggest you try salt therapy, you might be a bit hesitant if you do not know what it entails.

What is salt therapy?

Also called halotherapy (the word “halo” is a Greek prefix that means salt), salt therapy is “the inhalation of micronized [broke into very fine particles] dry salt within a chamber that mimics a salt cave environment,” according to the National Institutes of Health (NIH).

Reportedly, salt therapy originated hundreds of years ago in Eastern Europe in Poland’s natural salt mines. Salt mining workers appeared to have fewer skin and respiratory issues than other mine workers in the area where there was not any salt present.

There are reports about how refugees during World War II who hid in salty caves noticed improved breathing.

“Father of Medicine” Hippocrates also believed in the inhalation of salt to treat respiratory problems.

...there are spas around the United States and worldwide that do their best to imitate natural salt caves.

A halogenerator, a machine used outside of the spa salt cave (also called salt room), grinds the salt and pumps micro particles of it into the air of the salt room. There is usually so much salt on the floor of the cave it looks like snow, and even the walls are made of salt. It is pretty much like being inside a salt lamp.

The micro particles filtered into a salt room may be small enough to be inhaled into the deepest part of the lungs and penetrate through the bronchial tree and into the alveoli (any of the small air spaces in the lungs where carbon dioxide leaves the blood and oxygen enters it).

The salt room is usually kept at a warm temperature with low humidity. And a salt therapy session usually lasts no more than 45 minutes to an hour.

What are the benefits of halotherapy?

Before we dive into possible benefits of salt therapy, it is important to acknowledge that salt therapy is an alternative form of treatment and should not replace standard medical treatment (unless your doctor specifically says so).

There is limited medical research about salt therapy and varying reports on whether it is effective.

With that said, here are some potential benefits of halotherapy.

Halotherapy may help you breathe easier

Salt is a natural anti-inflammatory, antibacterial and antihistamine. So when you breathe in those salt particles during salt therapy, it may reduce inflammation in the lungs, help clear mucus and even increase lung capacity.

Halotherapy may provide relief from the common cold, asthma, bronchitis and allergies. It may even help with chronic obstructive pulmonary disease (COPD), a progressive lung disease (often caused by smoking cigarettes) that makes it difficult to breathe.

This all makes sense that halotherapy may help with these ailments, considering saline solutions are often used in standard medicine to treat respiratory issues.

Halotherapy may clear your complexion

According to one medical doctor, salt therapy “...will improve people's skin by acting like an exfoliant, shedding dead cells and helping to promote healthy oil production.”

The anti-inflammatory and antimicrobial properties of salt may also help with skin issues, like acne, eczema and psoriasis.

Halotherapy may make you happier

If you decide to visit a salt cave at your next spa day, you will surely be in for an experience. Many report that visiting a salt cave truly provides a time to get away and unwind. Since they are built to mimic natural salt caves, salt rooms are said to have a magical feel and appearance to them.

People sometimes meditate and practice yoga inside these salt caves. There are even kid-friendly salt caves that provide toys.

Some use salt therapy as a way to manage stress. If you can keep your stress levels in control, you may reduce anxiety and decrease your risk of developing depression.

The salt also creates negative ions which are said to help reduce stress and purify the air (this is why you may see people using salt lamps at home or in their office).

“In the studies, negative air ionization is created with a machine that adds an electron to oxygen molecules to create a negative ion. Negative ions are also created in nature by crashing ocean waves, radiation, and even sunlight,” according to one report.

“These ions are believed to increase the amount of oxygen in the blood, but researchers are still looking into their exact influence on the body.”

The National Institutes of Health (NIH) also reports that negative air ionization has been associated with lower depression scores.

The NIH reports that some studies have found that exposure to positive air ions may be associated with feelings of unpleasantness, irritability and heightened anxiety.

Additional benefits of halotherapy may include improved energy levels and a stronger immune system.

And in most cases, we are not referring to table salt for this therapy.

“Unlike table salt, which is stripped of most of its natural minerals and fortified with iodine, the Himalayan rock salt you'd find in these caves is rich in minerals such as calcium, potassium, magnesium, sodium, iodine, bromine, and copper. So, in theory, you absorb these minerals when you breathe the salty air,” according to this report.

Are there any side effects or downsides to halotherapy?

Because salt is a drying agent, some may experience a “salty cough” that usually goes away within a day or two after treatment. It is important to drink plenty of water after a salt therapy session.

You also have to be mindful of what type of salt the spa you plan on going to is using.

Some spas may use the following:

Many spas use both pink and white Himalayan salt.

Some reports express concern about the use of salt that is NOT pharmaceutical grade, fearing “[s]ome of the elements could be harmful, especially when the very small micron sized particles get deep into the respiratory system.”

"To get into your lungs, the particles need to be very small," he says, "between 1 to 5 microns in diameter.... A salt room wouldn't be as effective as the mist from an inhaler for people with asthma or a saline solution for people with sinus or allergy problems."

And not all are convinced that salt therapy will really help people with their respiratory issues. According to this report, “...health professionals who specialize in respiratory conditions tend not to be convinced by the technique.”

Another report expresses concern that with their warm temperatures and enclosed spaces, salt rooms may be bacteria breeding grounds.

So as you can see, there are advocates for salt therapy as well as people against it. If halotherapy is something you are interested in trying, do your research and consult your doctor first. Call the spa you are interested in going to and ask them what type of salt they use. Let your doctor know this information, and ask him or her if salt therapy is a safe and viable option for you.