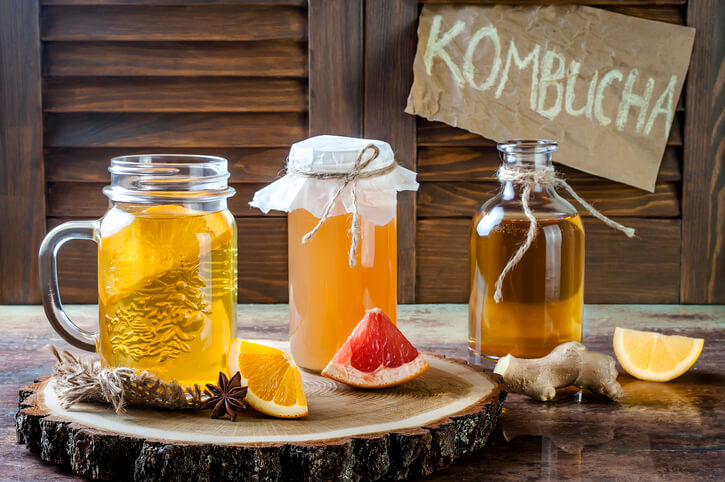 Chances are you have heard, seen or clicked on an ad that mentioned kombucha fermented tea products. The marketing juggernaut propelling kombucha to celebrity status has really pushed this fizzy, gut-loving elixir to the forefront of the domestic drink section.

The laundry list of celebrities that swear by kombucha is about as lengthy as the red carpet they walk on. Gwyneth Paltrow, Kirsten Dunst, Lindsay Lohan, Madonna, Halle Berry, Meg Ryan, Anna Paquin, Cher, Barbara Streisand, Alec Baldwin and Susan Sarandon are just a small group of Hollywood regulars that enjoy the potential health benefits of this probiotic beverage.

For those of you not in the ‘know’ about what kombucha exactly is, I’m here to help.

So What is Kombucha?

Kombucha is a somewhat sweet, extremely bubbly drink made of yeast, a little bit of sugar, and fermented tea. It reportedly has a number of health benefits, including promoting gut health and liver function because it is rich in antioxidants and probiotics.

Kombucha is made by fermenting a complex conglomerate of bacterial and yeast cultures, which congeal to produce a disc-like mushroom cap, often referred to as the SCOBY (symbiotic culture of bacteria and yeast).

SCOBY is a living organism and active culture. It is very much alive with all sorts of bacteria, acids and yeasts. It may resemble a scene from a sci-fi movie, but this jelly-fish looking culture is what gives kombucha all of its reported health benefits.

Once the SCOBY is removed and the fermentation process is complete, the end result is an effervescent liquid that is rich in vitamins, enzymes, amino acids, organic acids and a slew of other goodies that have yet to be extensively studied.

At this point I should probably share a word of warning. The au naturel taste of homemade kombucha can be quite pungent and is an acquired taste. You can add natural flavor at home too, though. That being said, the majority of kombucha drinkers buy theirs from a manufacturer. Kombucha producers have spent countless hours fine tuning the flavor of commercial kombucha, thus transforming this once niche product to a well-established segment of the health and wellness beverage sector.

History of Kombucha and Fermented Teas

Part of kombucha’s mystique was birthed from its reputation as a panacea for all kinds of ailments like allergies, chronic fatigue, digestive complaints, high blood pressure and even cancer.

The first recorded use of kombucha was around 221 B.C. during the Qin Dynasty, and was created for the Emperor Qin Shi Huangdi. It was known as “The Tea of Immortality,” thought to keep the emperor young and healthy.

The name for ‘kombucha’ came later. It originated when the beverage was imported from Manchuria into Japan around 415 A.D. by the physician Kombu and served to the Emperor Inyoko. The word is a combination of Kombu’s name and the Japanese word for tea, “cha.”

Forbes reports that, “Eventually the tea was brought to Europe as a result of trade route expansions in the early 20th century, most notably appearing in Russia (as "Kambucha") and Germany (as "Kombuchaschwamm"). Despite a dip in international popularity during WWII due to the shortage of tea and sugar supplies, kombucha regained popularity following a 1960s study in Switzerland comparing its health benefits to those of yogurt.”

There are still many scientific layers that need to be peeled back when it comes to understanding kombucha. But a chemical analysis of kombucha reveals a full spectrum of vitamins, minerals and organic acids which may be beneficial for the immune system and improve gut health.

So what are organic acids you ask? Organic acids are chemical compounds produced by various microorganisms found in foods, or made by our own bodies through the metabolism of food molecules. Two examples are the following:

Other nutrients found in Kombucha include vitamins like B1, B2, B6, B12 and C, trace minerals as well as amino acids. These nutrients are all necessary to help us maintain our health.

It is important to be careful when making kombucha at home, as it can ferment for too long. It is also possible for kombucha to become contaminated when not made in a sterile environment. Over-fermentation or contamination may cause health problems, so it may be safer to buy kombucha in a store than to make it at home.

Kombucha is an acidic beverage and the Centers for Disease Control and Prevention (CDC) has expressed some concern that too much kombucha could cause acidosis — a condition wherein the body’s pH becomes overly acidic and dangerous. A couple of unexplained deaths due to acidosis were linked to kombucha, but it’s unclear whether kombucha was the real cause.

Finally, always keep an open dialogue with a competent medical professional when introducing new foods into your diet. As with most things, moderation is key.