Risks of Eating Leftovers You May Not Think About 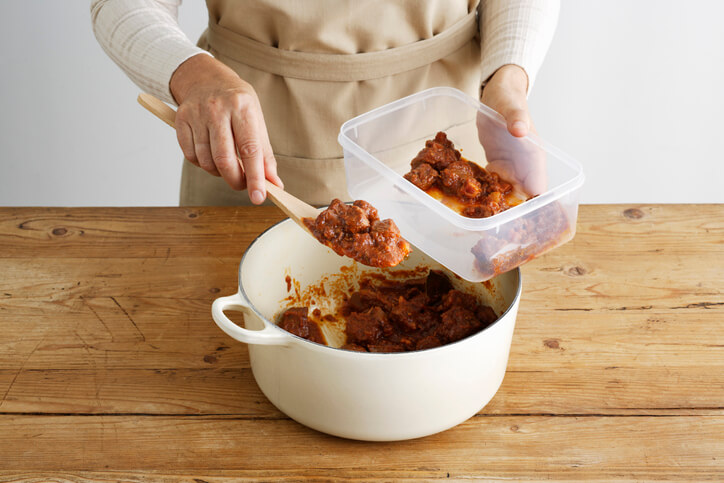 Eating food is one of life’s greatest pleasures. In fact, sitting down to a delicious meal may be a great sensory experience. Food can look good, smell good and taste good.

Just think about how you feel on a rainy day or when you are sick and curl up with a bowl of homemade chicken soup. The soup is warm, comforting and feels good going down. Food brings people together and is important in every culture across the globe. And most importantly, food gives our bodies the nutrients, including protein, carbohydrates, fats, vitamins and minerals, they need to function and stay healthy.

But like everything else in life, eating food comes with risks. If food is not handled properly or you don’t practice proper hygiene habits (e.g. there’s a reason why when you were a child, your parents told you to wash your hands before you ate), you may put yourself at risk for foodborne illnesses.

The Centers for Disease Control and Prevention (CDC) estimates that each year 48 million people get sick from a foodborne illness, 128,000 are hospitalized and 3,000 die. The CDC also reports that researchers have identified more than 250 foodborne diseases, most of them being infections caused by a variety of bacteria, viruses and parasites.

A rare but deadly food poisoning case that occurred back in 2008 was recently brought to the forefront after a popular YouTuber named Dr. Bernard discussed the incident on his channel.

A college student in Belgium identified as “A.J.” became extremely ill after eating five-day old leftover pasta. Reportedly, the pasta had not been refrigerated and had been “stored at room temperature” before he used a microwave to warm up the pasta.

One food safety myth is that the heat from microwaves will kill any harmful bacteria. But according to FoodSafety.gov, “Microwaves don’t kill bacteria – microwaves generate heat that kills bacteria in foods. Microwave ovens are great time-savers and will kill bacteria when foods are heated to a safe internal temperature. But microwaved foods can cook unevenly because of irregular shapes or variations in thickness. Even turntable-equipped microwave ovens can cook unevenly and leave cold spots where harmful bacteria can survive.”

After eating the pasta, A.J. went out to participate in some sports activities but ended up having to return home due to experiencing headache, abdominal pain and nausea, according to a report provided by the National Institutes of Health (NIH).

When he got home, “he vomited profusely for several hours and at midnight had two episodes of watery diarrhea. He did not receive any medication and drank only water. After midnight, he fell asleep. The next morning at 11:00 AM, his parents were worried because he did not get up. When they went to his room, they found him dead.”

How Could a Young, Healthy Man Die of Eating Leftover Pasta?

Again, this is a rare incident. However, an investigation revealed that the pasta was spoiled and had been contaminated with a bacteria called Bacillus cereus.

“Bacillus cereus or B. cereus is a type of bacteria that produces toxins. These toxins can cause two types of illness: one type characterized by diarrhea and the other, called emetic toxin, by nausea and vomiting. These bacteria are present in foods and can multiply quickly at room temperature,” (FoodSafety.gov).

According to the NIH, emetic strains of the bacteria were isolated in the case of A.J. Dr. Bernard said that the spoiled pasta actually shut down the young man’s liver.

Dr. Bernard is quoted in one report saying, “Typically, food poisoning just causes stomach inflammation, nausea, vomiting and diarrhea, it doesn’t typically cause acute liver failure, and even worse, we can’t find out which bacteria is causing the problem because culturing it would take days — days A.J. doesn’t have because his liver is quickly shutting down.”

But the NIH report claims that in “this case, the liver damage was mild and could not be the only explanation for the sudden death of a healthy young man...Although we cannot incriminate B. cereus as the direct and unique cause of death, the present case illustrates the severity of the emetic and diarrheal syndromes and the importance of adequate refrigeration of prepared food.”

And if you are a fan of going to farmers’ markets to get fresh, local nutrient-dense foods, read here to learn about safe food handling at the farmers’ market.