Getting the Perfect Photo May Be Detrimental to Your Health. 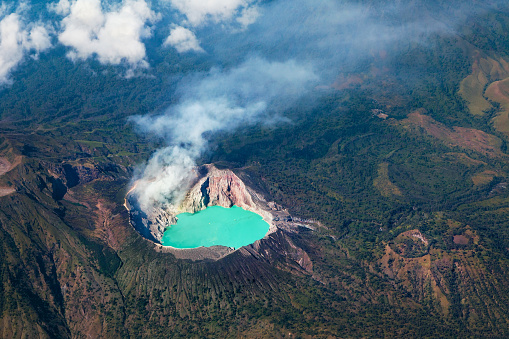 Some people, especially social media influencers, will go to great lengths in order to attempt to snap a viral-worthy photo even if it means risking their lives.

These were obviously accidents, but it’s important to be aware of the potential dangers in something as seemingly harmless as taking a photo. More recently, some social media influencers became ill after taking photos at a toxic dump.

Why on earth would anyone want to take photos at a toxic dump?

Well, this toxic dump appeared to be a beautiful turquoise-colored lake. Located in Monte Neme in Galicia, Spain, this area has been a popular tourist destination for quite some time for its beautiful scenery. But according to reports, the “lake” which Instagram influencers were swimming in iwas actually a former tungsten mine.

You may have seen tungsten in the form of jewelry such as a ring or earrings.

But to get a bit scientific, “Tungsten is known as one of the toughest things found in nature. It is super dense and almost impossible to melt. Pure tungsten is a silver-white metal and when made into a fine powder can be combustible and can spontaneously ignite,” according to Live Science.

“Tungsten is used in many different ways because it is very strong and durable. It is very resistant to corrosion and has the highest melting point and highest tensile strength of any element. Its strength comes when it is made into compounds, though. Pure tungsten is very soft.”

So, the “lake” at Monte Neme “...is actually filled with hazardous chemical waste that poured out from a closed World War II-era tungsten mine,” according to this report. The beautiful turquoise color, which you can see in these Instagram photos is there because of chemical contamination.

According to the report referenced above, one Instagram influencer went for a swim in the lake and said she developed a rash that lasted for two weeks and even suffered “bouts of vomiting.”

(If you are vomiting for a prolonged period of time, this may cause dehydration and depletion of essential nutrients like vitamins and minerals youl need to stay healthy).

And then another influencer had to be hospitalized “for damage to the skin and digestive system.”

According to this CNN report, Galicia’s water agency confirmed the toxic dump had high levels of aluminum and a low pH (which means it is acidic).

We are all exposed to some levels of aluminum, but there is concern when we are exposed to abnormally high levels of it. This material is considered to be neurotoxic, which means it can possibly be damaging to the brain.

“Aluminium is present in the human brain and it accumulates with age. Recent research suggests that a significant proportion of individuals older than 70 years of age have a potentially pathological accumulation of aluminium somewhere in their brain,” according to this source.

More research is needed, but the accumulation of aluminum has also been connected to the development of Alzhiemer’s disease.

And despite warnings, some Instagrammers still go to the “lake” to take photos. Some that have gotten sick have even said that it was all worth it just so they could get that perfect photo.

Obviously, no photo is worth your health and, of course, certainly not your life. Don’t fall into the trap of getting caught up in the moment and doing everything necessary to get that photo. I would suggest not getting into a body of water without having some idea what is in it. It’s one thing to get in the water at a public beach or visit a waterfall, but it’s perhaps riskier to enter a body of water in a very remote area that is oddly bright blue.

This blog is also a great reminder to take advantage of the pH toxins test. You don’t have to be a risky Instagram influencer to be exposed to harmful toxins. If you’re like most people, you are constantly exposed to toxic minerals or other materials in your environment, products, occupations and/or food. These toxins can accumulate in your body, damage your cells, and cause serious health issues. Don’t wait for toxins to build up in your system. Be proactive and get tested to figure out exactly which toxins are accumulating in your body.

If you discover an accumulation of certain toxins in your body, a competent healthcare professional can help you reduce the levels of these toxins by adjusting your diet and implementing supplementation if necessary.

pH Toxins
Minerals - The Forgotten Nutrient: Your Secret Weapon for Getting and Staying Healthy