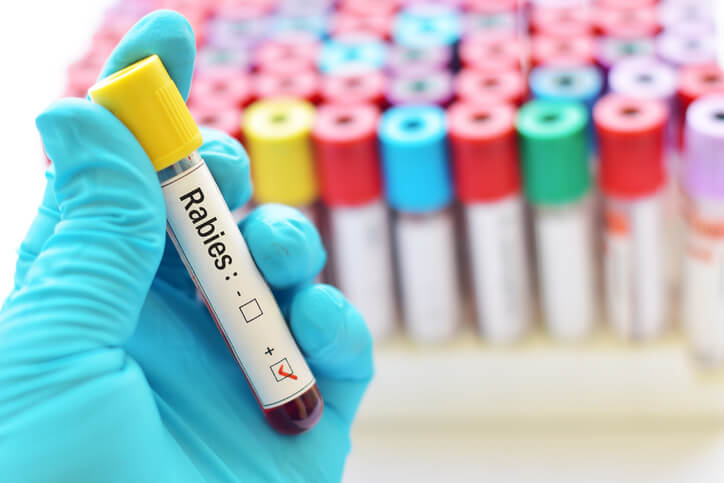 Rabies is an illness most of us only imagine happening to someone in a movie. A person infected usually becomes this wild, rabid creature foaming at the mouth who everyone must avoid.

Although rare in the United States (only 1 to 3 cases reported annually), rabies is a serious virus that infects the brain. In fact, rabies is considered by many as one of the world’s deadliest viruses, along with the Ebola and Dengue viruses. Once the rabies virus enters the muscle tissue of the host, it travels to the brain where it multiplies and usually causes death. Rabies is not an airborne virus, like the flu.

“Rabies can’t go through unbroken skin. People can get rabies only via a bite from a rabid animal or possibly through scratches, abrasions, open wounds or mucous membranes in contact with saliva or brain tissue from a rabid animal,” reports The Humane Society of the United States.

According to the World Health Organization (WHO), dogs [their bites] are the main cause of deaths due to rabies in humans, contributing up to 99% of all rabies transmission to humans. WHO also reports that rabies causes tens of thousands of deaths every year, mostly in Asia and Africa.

Recently, a 65-year-old woman from Virginia died of rabies after she was bitten by a puppy in India, where she was visiting on a yoga retreat.

(About 18,000 to 20,000 cases of rabies a year and about 36% of the world’s deaths from the rabies virus occur in India. Reportedly, India has the world’s largest incidence of dog-mediated human rabies deaths).

The bite incident reportedly occurred outside of the hotel that she was staying at. According to a statement from the Centers for Disease Control and Prevention (CDC), her wound was washed with water, “but no further treatment was administered.”

It is extremely important to wash wounds right away with both warm water and soap. If you take this proactive step, you can significantly reduce your chance of contracting rabies after being bit. WHO actually details extensive wound washing, “This involves first-aid of the wound that includes immediate and thorough flushing and washing of the wound for a minimum of 15 minutes with soap and water, detergent, povidone iodine or other substances that kill the rabies virus.”

"It destroys the brain, it's a really, really bad disease," said an Ebola virus expert and associate professor of microbiology at Boston University, in this report.

"We have a vaccine against rabies, and we have antibodies that work against rabies, so if someone gets bitten by a rabid animal we can treat this person...if you don't get treatment, there's a 100 percent possibility you will die."

And the tricky part about rabies is that it is somewhat of an ‘undercover killer.’ An NBC report discussing the woman vacationing in India said, “Rabies virus is almost 100 percent fatal once symptoms start. It doesn’t usually show symptoms immediately, so the yoga aficionado traveled home and resumed her normal life without knowing she was infected.”

But to further complicate things, symptoms may show as early as nine days after exposure or as late as seven years! The woman is said to be the ninth person in the United States to die after being infected with rabies after traveling or working out of the country.

So if you get bitten by an animal, especially while traveling outside of the U.S., it is imperative to wash the wound with soap and water right away and seek medical attention as soon as possible.

The CDC report claims that the woman did not show symptoms until six weeks after she was bitten. After returning home to Virginia, she noticed a pain in her arm while she was gardening. She visited a local urgent care, where she was diagnosed with carpal tunnel syndrome. She was given an anti-inflammatory medication and given a drug called hydrocodone (a strong pain reliever, an opioid). From there her symptoms intensified, and eventually she developed a severe brain infection and was finally diagnosed with rabies.

The early stages of rabies share similar symptoms with other diseases such as fever, headache and weakness. But once the infection progresses, more severe, rabies-specific symptoms occur including insomnia, anxiety, confusion, slight or partial paralysis, excitation, hallucinations, agitation, hypersalivation (when you produce more saliva and may drool, the ‘foaming at the mouth’), trouble swallowing and hydrophobia (fear of water). Death usually occurs within days of the onset of these symptoms, according to the CDC.

Clearly, it is extremely important to seek immediate medical attention if you are bitten by an animal. This way a doctor can determine whether you need a Rabies Post-Exposure Prophylaxis (PEP).

There is also a pre-exposure, a preventive, vaccination for rabies. This vaccination is usually administered to people who are at a higher risk of contracting rabies, including veterinarians and animal handlers.

How Else Can You Be Proactive About Rabies?

You can also make sure you are getting enough vitamin C in order to quickly recover from a wound.

Finally, you should never overlook the importance of boosting your immune system by being nutritionally balanced. The proper amount of nutrients, such as vitamins and minerals, may help combat many viruses and diseases. But rabies may require more than just a strong immune system. It is a preventable virus, so the goal is to always prevent it but if contracted, treatment must be administered asap.