Vaping Is Giving Our Children Lung Disease. Learn How You Can Be Proactive 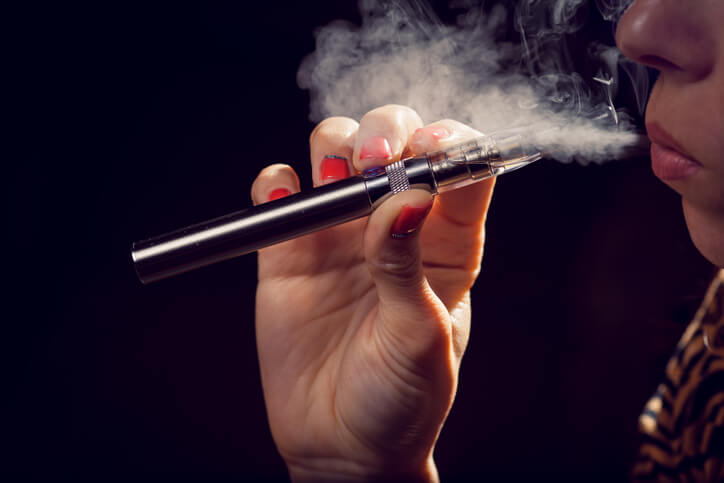 The news about the risks and dangers of vaping keep getting more frequent and alarming!

Instead of being a good way to help people quit smoking, or at the very least a “safer” alternative to smoking, vaping is turning out to be a veritable public health hazard.

It’s become such a health issue that officials with the Centers for Disease Control and Prevention (CDC) are reportedly reviewing 450 possible cases of lung disease linked to vaping in 33 states.

Just in case you’re not familiar with the practice of vaping, it is a slang term for inhaling the vapors (hence “vaping”) produced by a battery-operated nicotine delivery system. These delivery systems are also known as electronic cigarettes or e-cigarettes or vape pens. When the user puffs on the device – some of which look like an innocuous USB device while others look more like regular cigarettes or pipes – the liquid in a cartridge is heated, resulting in an aerosol or vapor which the person inhales.

To give you an idea of how risky vaping is, especially for teens and young adults, the CDC has now confirmed deaths directly related to vaping. As of now, five deaths have been associated with vaping.

Many of the 450 possible cases of lung disease linked to vaping mentioned earlier resulted in hospitalization, with some patients requiring a ventilator or a stay in the Intensive Care Unit.

Take a look at some of the following cases. Luckily, these people survived, but the outcome could have been much worse:

Another teen began exhibiting anxiety and mood swings so sudden and explosive that his mother reported becoming afraid of him. It turned out, in his case, that he most likely was going through nicotine withdrawal.

Patients of vaping have shown up at the Emergency Room with a variety of symptoms, including shortness of breath, cough, fatigue, vomiting, wheezing, chest pains, fever and diarrhea. They also reported that the symptoms worsened over a period of time - sometimes weeks – before they or their parents decided to seek medical help.

One thing many of these cases have in common is that they involve teens and young adults, who are in the age group that usually vape. According to the CDC, more than 3.6 million U.S. middle and high school students reported using e-cigarettes (vaping) over the past month. This survey was conducted in 2018, so given the growth in vaping, the number most likely is now much higher. There is evidence that today, more high school students use e-cigarettes than regular cigarettes.

These recent incidents have alarmed the CDC so much that officials took the step of issuing an advisory recommending that people not use e-cigarette products if they are concerned about these specific types of health risks. The CDC also warned that these products should not be used by youth, young adults, pregnant women and adults who do not currently use tobacco products.

While doctors and researchers have not yet confirmed whether the e-cigarette devices themselves or the specific ingredients in the liquid (the “vape juice”) they vaporize are the cause of the recent increases in lung illnesses, all indicators point to the “vape juice.” In addition to various flavorings, this liquid may also contain nicotine, THC (the active ingredient in marijuana/cannabis) or any number of other ingredients that users or others basically create as a “home brew.” Since the latter may play a role in the recent increase in illnesses linked to vaping, the CDC also is also warning users to not buy cannabis (usually in the form of THC oils) or other vaping ingredients off the street.

On top of this, vitamin E oil in the vape juice may be a huge culprit in causing illness. According to this report, “...a common factor seems to be the presence of Vitamin E acetate (a.k.a. Vitamin E oil) in patients' homemade THC cartridges, likely added as a thickening agent.”

Interestingly, the vitamin E oil does not appear to be in the nicotine-based vape products.

“Vitamin E is a common supplement found in many health and beauty products, and can be safely eaten or applied to the skin in oil form. When vaped, however, Vitamin E acetate can pose known health risks, as by coating the lungs and leading to lipoid pneumonia.”

According to the U.S. Food and Drug Administration (FDA), other ingredients in the liquid may include propylene glycol, diethylene glycol (a toxic chemical used in antifreeze), acrolein (an herbicide primarily used to kill weeds) and vegetable glycerin. Many, if not all, once in vapor form, have been shown to pose a health risk including microfine particles that can become lodged in the lungs and cause irritation, lipoid pneumonia, the development of “popcorn lung,” which obstructs the lungs and is irreversible, as well as cancer.

And a recent study by the University of Pennsylvania claimed that vaping can damage blood vessels after just one use, independent of what the user is inhaling. Researchers have also found that daily vaping increases the risk of having a heart attack.

Another health risk of vaping is that instead of preventing, or at least discouraging, teens to not smoke traditional, combustible cigarettes, the opposite is proving to be true. Many teens who start out vaping do, in fact, move to traditional cigarettes.

Other studies suggest that since most vape juice contains nicotine – and in varying degrees – vaping also poses the risk of creating an entire new generation of nicotine addicts. Others also worry the nicotine, and other substances in vape juice, such as THC, could act as a gateway to other, more potent drugs. And, yes, second-hand vaping does pose a health risk to those inhaling second-hand vapor exhaled by the user.

Honestly, I don’t know how anyone could vape after seeing these horrific stories! Share these stories with your teens and kids!

There are several things that you can do to protect you and your family’s health from the health risks of vaping. Many of these steps are similar to what you may already be doing to reduce the health risk from regular first, second and third-hand tobacco smoke.

It’s also important to remember that the FDA has not found any e-cigarette to be safe and effective in helping smokers quit. If a smoker is ready to quit, the best thing is to call 1-800-QUIT NOW or talk with your doctor about the best way to quit using FDA-approved methods and treatments.

Finally, remember, if you are truly trying to quit smoking, you might want to consider eating watercress. One study conducted by the University of Pittsburgh suggested that watercress extract may detoxify carcinogens in smokers.