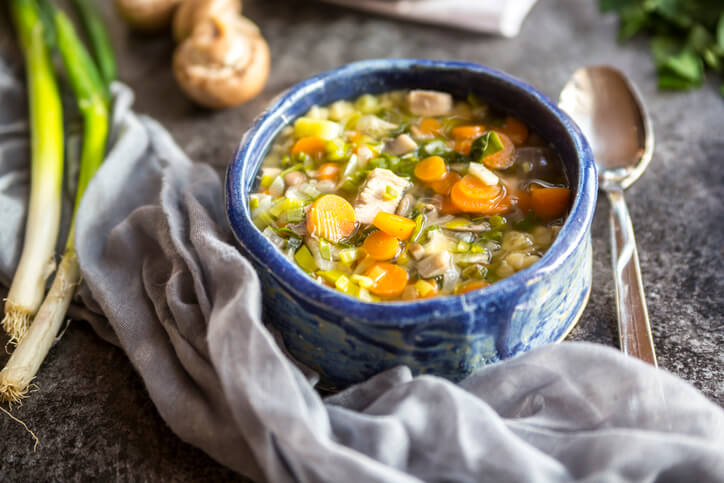 Like me, you probably have childhood memories of your parents bringing you a big bowl of hot, homemade chicken soup in bed when you weren’t feeling too good. And even if you had an upset stomach, the soup was likely appetizing. It almost felt like a warm, soothing hug going down. To me, it was just as comforting as my mother’s hand on my forehead, checking to see whether I had a fever.

Soup, in general, has been consumed throughout history and considered to be a powerful health elixir. Reportedly, it is one of the ways the Yin and Yang is balanced. If you do not know what Yin and Yang is, let me explain a bit.

One of the backbones of ancient Chinese medicine is that people need to balance the Yin and Yang, “the two complementary forces that make up all aspects and phenomena of life.” Yin represents female, darkness, earth, cold, passivity and absorption. Yang stands for male, light, activity, hot and penetration.

Just like having a balance of each of the six essential nutrients (fats, water, carbohydrates, protein, vitamins and minerals) is the key to lasting health, practitioners of ancient Chinese medicine believe a balance of Yin and Yang is necessary for health and wellness.

“For cold syndrome caused by excessive Yin cold, medical diet therapy suggests to ‘treat cold with hot herbs [as in with soups and teas].’”

And chicken soup appears to be one of the most recommended soups to help us stay healthy.

“Archaeological evidence shows that people started using poultry to make soups soon after they discovered how to boil water. The earliest recorded evidence of chicken soup being used as a therapeutic dish dates back to Chinese antiquity,” according to this source.

“In the second century BC, the Chinese medical text, Huangdi Neijing, declared that chicken soup is a ‘yang food’ – a warming dish – to which different therapeutic herbs can be added to cure various diseases. In China, chicken soup is given to women after pregnancy and to elderly people. Both groups are considered to be in the need of energy-giving yang food, which is believed to transport ‘energy’ around the body and have an invigorating effect.”

Chicken soup has also been widely popular in Jewish culture, even referred to as “Jewish penicillin” for its anti-pathogen and immunity-boosting properties.

And, now, a recent report references a dietician who breaks down all of the magical ingredients and benefits in a bowl of chicken soup. So let’s explore this:

Due to vomiting, loss of appetite and diarrhea, dehydration is unfortunately a common side effect of being sick. Of course, drinking plenty of water is important when you are sick, but bone broth based soups, like chicken soup, are soothing, hydrating, nutrient-dense and are said to boost the immune system.

Although it’s true that many Americans have to watch their sodium intake because of hypertension, sodium is still an essential mineral we all need. Sodium regulates the blood and protects the body from body function impairment. Sodium also regulates body fluids, while transmitting electrical impulses in the body. In addition to this, sodium in moderation may be good when you are feeling under the weather. According to the report, sodium and other seasonings in chicken soup may help awaken those dull taste buds you often get when you are sick with a cold. As a result, sodium may be great at increasing your appetite when you are sick, and eating healthily while sick is important for increasing strength and preventing nutritional deficiencies.

The report states, “The chicken in your soup offers a number of benefits. It's high in protein that helps the immune system, and is also a good source of vitamins and minerals, such as B vitamins, which boost immunity and help with digestion.”

“Chicken is also high in tryptophan, which helps your body produce serotonin that can enhance your mood and give you the feeling of 'comfort' that helps make chicken noodle soup a true comfort food." Chicken soup truly is a comfort food!

Many would likely say that noodles are the best part of chicken soup. And in a way, they may be because they are a source of carbohydrates! According to the dietician in the report,   “carbs are the preferred source of energy for your body, so getting in a good dose through soup can help you feel less sluggish."

The veggies in chicken soup are nutrient-dense and may fight inflammation, viruses and harmful bacteria. “Vegetables such as carrots, celery, and onion [which are staple ingredients in chicken soup] have vitamins C and K, and other antioxidants and minerals.”

“Not only does this help build a healthy immune system to fight off viruses, it also helps your body recover from illness more quickly."

On top of all the healthy ingredients in soup, the hot steam may help with congestion from a cold and help you breathe better. “A 1978 study of nine women and six men reported in the journal Chest found that sipping hot chicken soup increased the flow of mucus significantly better than sipping either hot or cold water,” according to Harvard Health.

Go for the good stuff

It is a good idea to stay away from canned chicken soups which are usually very sodium heavy and not as nutrient-dense as homemade chicken soup. So take the time to whip up some chicken soup at home when your kid or spouse is not feeling too well. Add spices and herbs like garlic, turmeric, ginger, cayenne pepper, black pepper and parsley for additional nutrients, antioxidants, immunity boosters and flavor.