Can Breastfeeding Lower Your Chances of Postpartum Depression? 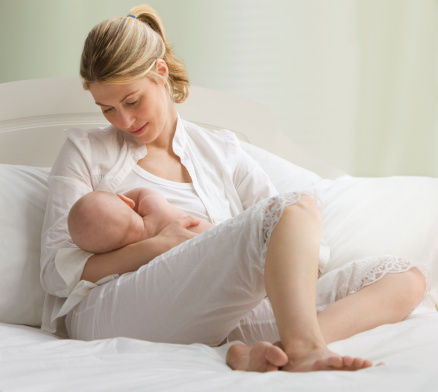 Australian Senator Larissa Waters recently caught the world’s attention by doing something many new mothers do. She breastfed her newborn baby girl. Waters and her 11 and a half week old daughter made history by being the first mother and child to engage in breastfeeding in Australia's federal Parliament.

Waters received an outpouring of support and appreciation. When she posted on Instagram the picture of herself breastfeeding in the Parliament’s chambers, with other elected officials surrounding her, some of the comments included:

On the other hand, some believe breastfeeding should not be done so publicly.

According to an article from The New York Times, one Twitter user tweeted, “Sorry #larissawaters but urinating is perfectly natural also, but we still go somewhere private to do it. Attention seeking.”

Clearly, the goal to “normalize” breastfeeding has been an ongoing fight, and it seems Senator Waters made a big breakthrough.

I think it is important to bring attention to this story, because many may not realize there may be a link between breastfeeding and the mental health of new mothers.

May is National Maternal Depression Awareness Month and to the extent breastfeeding may impact mental health of new mothers we should be proactive and educate ourselves. Indeed, studies show there may be a link between breastfeeding and postpartum depression (PPD).

What is postpartum depression (PPD)?

Depression is a challenging health issue, because there are so many different ways it can manifest itself and postpartum depression is one of them. This type of depression may occur in women after they give birth. The National Institutes of Health (NIH) reports postpartum depression affects an estimated 13% to 19% of women who have recently given birth. PPD usually occurs within the first three months of delivery.

NIH says, “[a]fter childbirth, the levels of hormones (estrogen and progesterone) in a woman’s body quickly drop. This leads to chemical changes in her brain that may trigger mood swings. In addition, many mothers are unable to get the rest they need to fully recover from giving birth.”

One journal reported pregnancy changes a woman’s brain for up to two years after giving birth.

What are some of the symptoms of postpartum depression?

So how does breastfeeding impact mental health?

However, one study, conducted in 2014, particularly caught my eye. This study is interesting, because the study focuses on understanding the importance of a woman’s intention regarding feeding her newborn baby.

In the study, more than 10,000 expectant mothers were surveyed. The mothers were asked during their pregnancies how they planned to feed their babies during the first four weeks after giving birth. After their babies were born, researchers asked at several points how each mother was actually feeding their baby and at what age infant formula and solid food were introduced.

Here are the results:

My sense is the problem with many of the earlier studies regarding breastfeeding and PPD is they do not always take into consideration influential factors such as family income, marital status, stressful life events, maternal education and more. There are so many variables that may cause depression, so pinpointing the effects of breastfeeding on mental health in new mothers may be a very challenging task. Pre-existing mental health conditions also need to be taken into consideration.

Nevertheless, to the extent there is some credible evidence that breastfeeding may reduce PPD, it is important to identify some nutritional factors that may increase a woman’s chance of breastfeeding.

It is well documented certain nutrients including vitamin D, folate, calcium, magnesium and iron are under-consumed in the United States. Furthermore, these nutrients are beneficial for breast milk production.

Below are a few foods to include in your daily diet to help you consume adequate amounts of these vital nutrients:

To learn more about critical minerals the body needs for breast milk production and more, read Minerals - The Forgotten Nutrient: Your Secret Weapon for Getting and Staying Healthy.