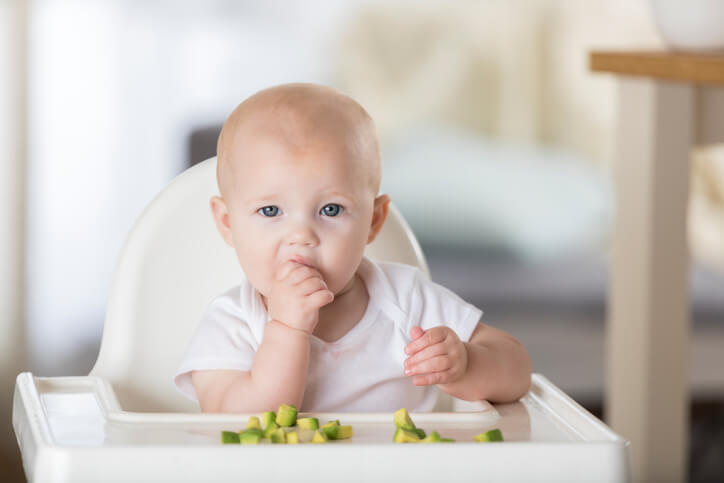 Recently, an absolutely hilarious and adorable video of a 9-month-old baby eating her first ice cream went viral. As soon as she has her first taste, her eyes bug out and with both hands she grabs the ice cream cone her dad is holding for her in an attempt to get as much of the cold, sweet stuff many of us go crazy for.

This video will surely put a smile on your face, but it probably also gives some great insight on feeding babies.

Babies are responsive. It is clear from the video that this baby is enjoying what she is eating, but babies can also show signs of fullness or just not wanting to eat.

In addition to this, the parents of this child pretty much gave up control (for the sake of having some fun) and let their baby determine how much she would eat at that moment.

I mentioned these things, because we tend to have this mentality that we should feed our babies when in reality perhaps we should let them feed themselves. (Of course, you have to assist them. But I think you get the idea).

We also tend to get concerned if they don’t want to eat when we want them to and, as a result, force feed them a bottle or “just a few more spoonfuls.” They are, afterall, just growing babies.

But recent research suggests that we may want to change our approach.

A study of 269 babies found evidence which suggests that self-fed babies were at a healthier weight. Sounds easier said than done, but let’s go over the details on feeding our little ones.

According to this report discussing the study, babies should be gradually introduced to solid foods around six months old.

“But in recent years, another question has arisen: should parents be spoon-feeding babies special pureed baby foods or could they just join in with the family and feed themselves from the very start?"

The latter of these methods is called “baby-led weaning.” And the report says that some parents are major fans of this method, saying it encourages babies to eat a wide variety of foods and helps them stay at a healthy weight. It gives them the power to eat when they are hungry and stop when they are full.

(According to Stanford Children’s Health, for baby boys and girls one to three months of age, a healthy average rate of weight gain is about one and a half to two pounds each month. By four to five months, your baby should be double their birth weight).

The examination of the 269 babies revealed the following:

And the heavier the baby does not necessarily mean the healthier. Of course, you do not want an underweight baby. But if babies are given more control over their own appetite, they may be less likely to overeat as toddlers. This is a big deal, considering America’s childhood obesity epidemic. And not all women are able to breastfeed, so giving your baby the opportunity to self-feed (as opposed to spoon-feed) may make a big difference and set them up for a healthier weight as he or she gets older.

Why was the weight difference only seen in babies who were bottle fed?

Again, this has to do with control.

When a baby is breastfed, the baby has a bit more control. If a parent is giving a baby a bottle, he or she is usually more inclined to make the baby finish the bottle and may end up force feeding them a bit. But with breastfeeding, the baby tends to just take what he or she wants or needs.

“Babies who are breastfed for the first 6 months tend to be leaner. One reason is that breastfed babies only eat when they are hungry, not when encouraged by parents,” reports Stanford Children’s Health.

“Research with younger babies shows that being ‘responsive’ during milk feeds also matters. For example, bottle fed babies who are fed responsively—with parents looking for cues they are full – drink less than those who are encouraged to finish a bottle,” according to the study report.

So use your best judgement. If your baby is not eating much or at all, obviously there is cause for concern. But if your baby looks healthy and the doctor says all looks good at routine check-ups, you may want to stop feeding your baby when he or she turns their head away from the bottle or breast. Learn to read those cues and give up some of your control.

“If you are spoon-feeding, let your baby set the pace of the meal. Offer them small spoonfuls and, again, pause in between, looking for signs they have had enough such as turning their head or pushing lots back out. Don't try to persuade them to finish a jar or eat too quickly,” according to the study report.

“Try foods such as soft cooked sticks of parsnip, broccoli or yam, flakes of fish or toast fingers. Cut food into pieces large enough for them to pick up, so that the food sticks out of the top of their fist. But make sure you avoid foods that could snap off in your baby's mouth such as hard apple slices or raw carrot sticks or small hard foods such as nuts or popcorn.”

Go for nutrient-dense foods (such as the ones recommended above) so that your baby gets the vitamins and minerals needed to grow healthily.

With self-feeding, don’t get too concerned if your baby does not eat that much at first. It takes time.

If you have a baby, are expecting one or plan to have one soon, I hope you find this information useful. I can’t stress enough how important it is to start healthy eating habits as early as possible in order to help our kids make wise food choices as they become toddlers and grow older.

For tips on how to raise healthy children and encourage good eating habits, check out these older pH Labs blogs.