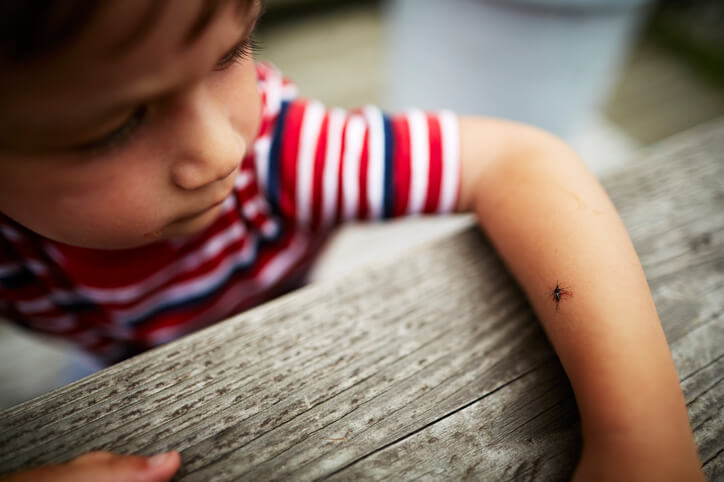 Mosquitos are a pain in the you know what - especially during the summer months. Luckily for most of us, these bloodsucking bugs don’t cause any major health issues other than those awful bites that are unbearable to not scratch.

But for many, mosquitos actually pose a major threat. And it’s been this way for a long time.

According to the Illinois Department of Public Health, mosquitoes are the most dangerous creatures on earth. “Mosquitoes and the diseases they spread have been responsible for killing more people than all the wars in history.”

“Even today, mosquitoes transmitting malaria kill 2 million to 3 million people and infect another 200 million or more every year. Tens of millions more are killed and debilitated by a host of other mosquito-borne diseases, including filariasis, yellow fever, dengue and encephalitis.”

(I’m familiar with what encephalitis is. It’s inflammation of the brain. But I didn’t know that, although rare, a mosquito bite may cause a person to suffer from this life-threatening condition).

And recently, it was a close call for this little boy living in North Carolina.

Six-year-old Noah spent almost a week in the hospital after being bitten by a mosquito. His mother is sharing his story to warn parents everywhere to never forget the insect repellent and get medical attention right away if their child experiences any of the same symptoms Noah did after getting mosquito bites.

According to Noah’s mother, he complained of a headache and then shortly after that, his lips turned blue and he went limp. On their way to the hospital, Noah started having seizures.

After receiving a spinal tap at the hospital, Noah was diagnosed with La Crosse encephalitis.

What is La Crosse encephalitis (LACV)?

LACV is a virus that is transmitted to humans through the bite of an infected mosquito. In severe cases, the virus may affect the nervous system -- encephalitis (inflammation of the brain), which can lead to seizures, coma, paralysis and even death.

(Researchers in La Crosse, Wisconsin first detected the virus in 1964, according to one source).

This disease is not transmitted from person to person. Most cases of LACV disease occur in the upper Midwestern and mid-Atlantic and southeastern [Noah was in North Carolina when he was bit] states, according to the Centers for Disease Control and Prevention (CDC).

Some of us may have mosquito-borne illnesses such as Zika and West Nile on our radar, but we may need to be more mindful of LACV.

According to one report, LACV is the most common cause of mosquito-borne illness in Tennessee and the country as a whole.

It is still considered a rare virus. The CDC reports that in the United States, an average of 63 LACV disease cases are reported each year. But just because it’s rare doesn’t mean it can’t happen, as we saw in Noah’s case. Noah’s mother said that the doctors told her this virus was pretty common in her area. She had never even heard of it until she had the major scare with her son.

Symptoms of LACV may include:

These symptoms are similar to symptoms of the flu and other common ailments, like a stomach bug, so it’s imperative to not “wait it out” if your child has these symptoms as well as mosquito bites. It’s better to be safe than sorry, and more severe cases of LACV usually occur in children under the age of 16. Sometimes symptoms may take between five to 15 days to appear.

There is not a specific treatment for LACV. The care is based on symptoms the patient may be having. Noah’s mother said what was really scary is that Noah did not respond to medications and treatment right away.

How Can We Be Proactive in Preventing La Crosse Encephalitis?

This virus is not 100% preventable, but the good news is that, as mentioned, it is pretty rare. We want to let kids be kids and play outside, but it is important to try to prevent mosquito bites as much as possible. So always use and re-apply insect repellent. It also helps to wear long sleeves and pants, especially if camping or spending long periods of time outdoors. It may also help to avoid being outside during the times when mosquitoes are most active. The CDC says that mosquitos who spread LACV are most active during the daytime.

It may not be realistic to have your kids avoid being outside during the daytime, but taking periodic breaks is a good idea. If the weather is very humid, rainy and muggy, it may also be wise to spend more time indoors. Also avoid being near stagnant bodies of water when it’s very humid, as these tend to attract a lot of mosquitos. Constantly check your kids bodies for bites and ask how they are feeling./

There are also credible sources that suggest that having a weakened immune system may increase your risk of becoming infected with viral encephalitis. One of the best ways to keep your immune system strong is by eating a healthy diet, rich in nutrient-dense fruits and vegetables. To read about specific vitamins and minerals that may help strengthen the immune system, read here.

And as always, we encourage nutritional testing. We need to be nutritionally balanced in order to have a strong immune system and be our healthiest selves.

Finally, all children get mosquito bites. But I think this mother’s quick reaction to her son getting sick is perhaps what saved his life. So remember, if your child exhibits any symptoms of LACV, especially if you notice he or she has mosquito bites, it is better to be safe than sorry and immediately seek medical attention.