It’s Flu Season. Learn How You Can Be Proactive 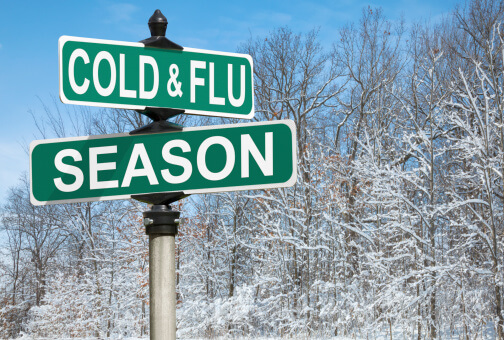 It’s the flu season again! And it seems like the incidence of flu related deaths, especially among younger people, has increased.

Take, for example, the tragic story of this 7-year-old boy. Aside from having asthma, his mom said he was a very healthy kid. But after being sick with a fever and a horrible stomach ache, he was taken to the emergency room and died of myocarditis, inflammation and damage of the heart muscle, reportedly caused by the flu.

And in another severe flu case, a 48-year-old father of four was put in the intensive care unit after showing signs of the flu over the Christmas holiday.

“Things got worse about day five when he said his chest was tightening, and he said it was hard for him to get his breath,” his wife said.

He had contracted influenza type-B and was experiencing renal failure. On top of that, he had a bad case of pneumonia (the flu virus can sometimes lead to pneumonia). As of a few days ago he was heavily sedated and  breathing with a ventilator, fighting for his life.

“He kinda just laid down and went about his day and that was the day he was coughing and said his chest hurt,” his fiancée reported. “He had a mild cough.”

Baughman later went to an emergency room after his cough got worse and his fever rose. But in less than 24 hours, Baughman was dead due to complications from the flu.

“Organ failure due to septic shock caused by influenza,” according to his mother. “It doesn’t seem real.”

The flu is generally most prevalent during the fall and winter months. Flu activity begins to increase in October and November and usually peaks between December and February. Flu season can last as late as May.

Because not everyone seeks treatment or gets an official diagnosis for the flu, it is hard to determine how many deaths in the U.S. have been caused by the flu. However, the CDC estimates around 36,000 people on average die from the flu annually.

So what exactly is the flu?

It is important to understand that respiratory illnesses, like the flu, affect our ability to get oxygen into our bodies. Oxygen is necessary for the healthy functioning of every cell in our bodies. Without oxygen, the food we eat would be useless and we would die within minutes. This is partly because we would be unable to convert all those great nutrients we consume from the foods we eat into energy that our bodies can use. This energy is what the body uses to fuel the muscles and brain, remove waste, control our genes and even heal.

Most healthcare professionals believe that flu viruses spread mainly by tiny droplets when people with the flu cough, sneeze, or talk.

You can catch the flu by touching a surface or object, like a countertop or doorknob, that has a flu virus on it and then touching your nose or mouth. This is why handwashing is extremely important.

More commonly, the flu is spread via person to person contact. For example, shaking hands with or kissing an infected person.

Reportedly, adults are contagious one or two days before symptoms appear and up to five to seven days after becoming sick. This means you can spread the flu before you even have symptoms.

So what do you do if you think you have the flu?

The flu cannot be treated with antibiotics, because it is a viral infection. People who are generally healthy usually have mild flu illness and do not need to seek medical care. It is recommended to stay at home and avoid contact with other people so that you do not spread the virus. But of course if you feel extremely ill and have a high temperature, it is always best to be safe and seek immediate medical attention.

There are certain groups of people that fall into the high risk group of possibly having serious flu related complications.

Some flu-related complications include:

How can you be proactive about preventing the flu?

One of the ways you can be proactive about preventing the flu is by boosting your immune system. An immunity-boosting diet, rich in water and other essential nutrients, like vitamins and minerals, is a very effective way to avoid the flu.

Some immune-boosting nutrients include:

And of course, make sure you have a balanced gut by ensuring you have an optimal amount of probiotics.

Finally, even if you are eating healthy, it is imperative to get a comprehensive nutrient test at least annually. Eating nutrient-rich foods does not guarantee that you will be nutritionally balanced. Your age, existing health conditions or medication use (both prescription and over-the-counter) may affect your ability to absorb adequate amounts of nutrients from the good food you eat. If you discover you have nutrient imbalances, you can work with a competent healthcare professional to tweak your diet, take good quality supplements, utilize IV Vitamin Therapy or use liposomal technology where appropriate.

And of course, many of you may be wondering whether you should get a flu shot. It is my opinion that this is a personal choice that should take into consideration your personal health status. It is often recommended that elderly people get a flu shot. Be proactive by consulting your doctor about what may be best for you.

Read Beyond The Headlines When The Issues Relate To Your Health